More about the RenGen

What is the RenGen: Renaissance Generation about?

This book explores the emergence of a generation on the verge of a second renaissance. Years into the knowledge economy, we no longer live our daily lives in a twilight zone of change. Who we are and what we care about are taking clear shape. There is a powerful player at the center of this transformation -‑ the cultural consumer. These are thinking, expressive individuals with an emerging set of imperatives, behaviors and ambitions that will set the agenda for society.

I have always been curious about the ways that culture and creative expression give rise to a collective identity. In my daily work as a consultant, I collaborate with people in a converging world of the arts, business, education and entertainment. In the past, these sectors had little interaction. The Internet changed that. As the dividers between disciplines become increasingly permeable, ideas flow freely back and forth. I am fortunate that my work life is a loamy seedbed for ideas.

What inspired you to write the book?

On my way to the office one day three years ago, I heard on my car radio that humorist/author David Sedaris was coming to Chicago. I should call for tickets, I thought. But I got busy and didn’t remember until a day later. By then, the event was sold out. Mind you, Sedaris is a writer whose act involves standing in front of a microphone and reading, yet he’d sold out a 5,000-seat venue in a day! That was something of an epiphany for me: What I thought I understood about mainstream interests didn’t compute with situations like this one.

Do you mean Americans are actually smarter than we seem?

Yes. Otherwise, why do 65 percent of Americans cite reading as their preferred leisure activity? Why do companies like Google and Microsoft seek to borrow from the intellectual sanctums of museums and libraries for entertainment content? Why do art museums, aquariums, zoos and science centers draw more foot traffic than all the professional sports teams in the U.S. combined, including auto racing? Why do teenagers turn up in record numbers at poetry slams and post original short stories on their blogs? Why have applications to art schools shown aggressive growth over the last decade? Why do millions of people create blogs, facebooks and post personal videos to express themselves? Our concept of mass culture needs an overhaul.

We need to understand the cultural consumer as a thinking, expressive human being if we are to fully benefit from what lies ahead. As a society, we need to prepare for the idea that we are poised for a rebirth. The evidence of its imminence abounds. Without an updated, radically new view of society, we will fail to benefit economically, as well as countless other ways, from this new wave of opportunity.

Who should read the book?

This book aims to help people who are involved in the knowledge economy -‑ working in education, technology, the arts, design, entertainment and business ‑- to commit their talents more purposefully to a society on the brink of a rebirth.

How did you research the book?

The research was the intellectual equivalent of climbing Mt. Everest. I delved into history books, consulted scholars, educators, marketers, businesspeople, artists, psychologists, physicians, scientists, urban planners and even futurists. I went back and forth across time periods to discover the social, political and economic patterns that lead to a renaissance.

Major foundations also were sources.  The Wallace Foundation unlocked its vault of research and invited me to feast on the findings. The New York Philharmonic handed over a 6-inch-thick stack of audience surveys. In the business community, one contact led to another, and I found myself talking with research directors and analysts who generously shared their data and perspectives on the shifts they were seeing in consumer interests.

I traveled to Italy, focusing on Florence and Rome. That trip was pivotal. In the heat and dust of the Roman summer, I began to see beyond the ruins -‑ beyond the ornate trappings of the once-imperial Catholic Church, beyond the master works by artists never since matched in creative output ‑ to see clearly one question: What made all this possible? Something clicked then – the realization that that level of mastery occurs for a reason; it is not a fluke. What I would later discover went beyond the usual notions of a renaissance as the confluence of talent, ideas, sponsorship and an appreciative public.

My team did original research, as well. Working with the Marketing Executives Networking Group, we conducted an online survey of 1,400 senior marketing executives. With help from Donna Tatum, a psychometrician who lectures at the University of Chicago, we tested to see how aware the marketing community was of the phenomenon we were tracking. Better yet, we wanted to see if marketing professionals were acting on it.

Yes and no. They were observing a shift in consumer interests, but felt ill-equipped to act on it. I hope the book helps with that. I included case studies on brands as well known as Reebok and Absolut, and as low-profile as Winzeler Gear to give readers fresh ideas.

Did you have help writing the book?

Yes, thankfully. I recruited two researchers, Alice Sneary and Ann Trampas, along with several advisers, to help me understand what I was witnessing. Before long, I was engaging colleagues, friends, even my children, in theorizing and testing assumptions. My theories developed organically, looping from data to assumptions to debate and revision, all with the help of people I encountered on a daily basis.

The book credits culture scouts ‑ what do you mean by that term?

I am invited to speak a lot. As a matter of necessity, I made my presentations part of the organic process of writing this book, talking about the idea of a RenGen in speeches across the country. Some writers would consider this a risky practice, exposing one’s intellectual property to idea theft. However, by openly airing my ideas, I was able to recruit culture scouts ‑ people who had also picked up the scent and were willing to share their observations.

Who are these culture scouts?

Theater ushers, school teachers, clerks at local stores, librarians, high school students, a developer of online games, marketing managers, advertising executives and independent film producers were all scouts. They expanded my notions of “culture” to embrace a broad swath of perspectives. And they’re still contributing ideas and observations. I get the occasional e-mail saying, “Hey, I saw this thing happen the other day that was soooo RenGen.” How gratifying.

How would you characterize your book?

It is not a history book about the Renaissance. It is about this question: What forces bring about a renaissance? Using a combination of narratives and research findings, it paints a picture of a new American popular culture driven by ideas, creativity and aesthetics. Yes, there is some history, as well as some analysis, practical tips on how to use the information in a business context, and, I fervently hope, there is inspiration.

Will the book create change?

RenGen explains the change you’re already witnessing. It points the way beyond fear. In a world poisoned by a century of progress at any price, it is easy to look around and believe we are in a free fall. But civilizations have cycles. The twilight moment right before one civilization ends and another emerges is often driven by cultural clashes, religious wars, polarizing viewpoints and overreaching rulers. Look around you. What you see marks the end of the end ‑ but also the beginning of the beginning. 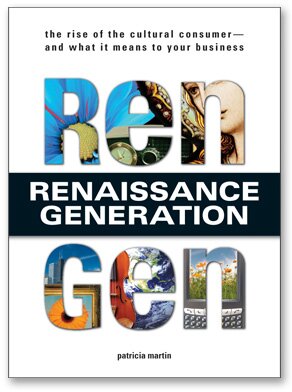